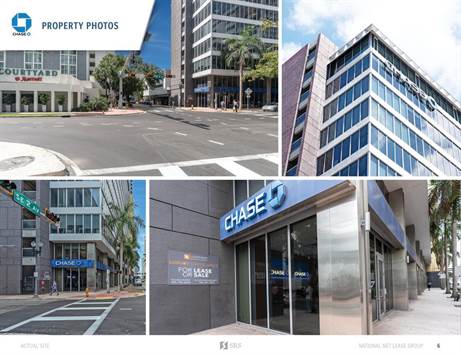 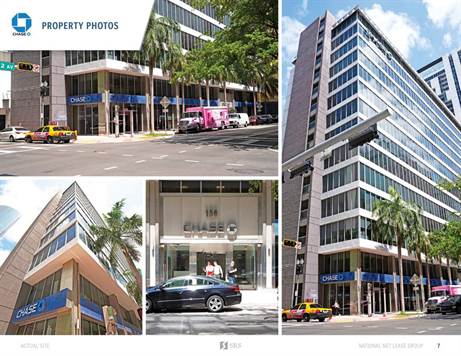 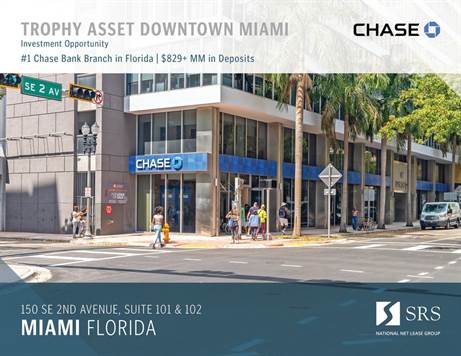 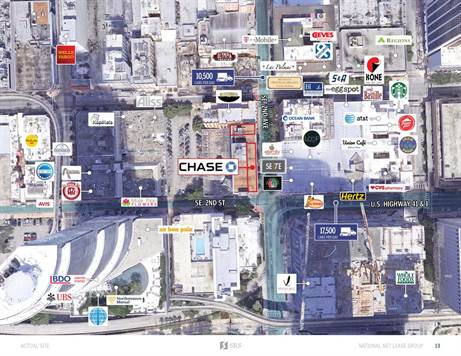 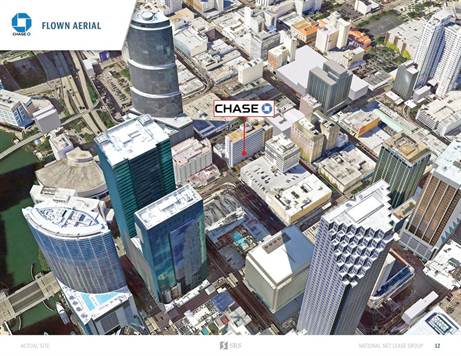 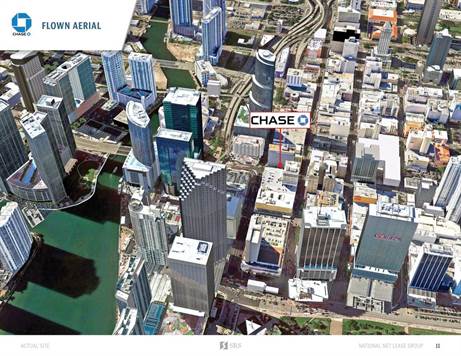 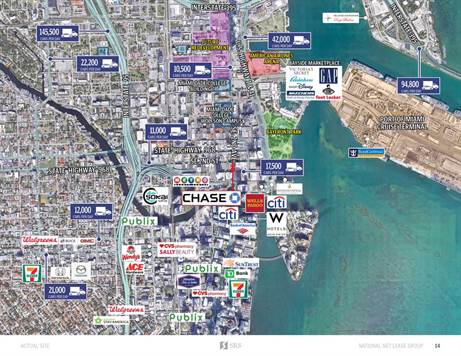 DESCRIPTION
Pleased to offer the rare opportunity to acquire the retail condominium interest in a modified net, street-level, Chase Bank investment property located in the heart of downtown Miami, FL. The tenant, Chase Bank (S&P: A- | NYSE: JPM), has approximately 2.5 years remaining on their primary term with 3 (5-year) options to extend. . The lease features annual 3% rental increases throughout the remainder of the initial term and through all option periods, steadily growing NOI and hedging against inflation. The lease type is modified net as the tenant occupies ground level suites 101 and 102 in a Retail/Office Condominium tower in the heart of downtown Miami. Chase Bank has occupied this location since 2002, and is paying far below market rents. This location is also Chase Bank’s #1 deposit branch in Florida with over $784 MM in deposits as of June 30, 2019. The building which was constructed in 1967, was renovated in 2014 and features a cleaner and more modern design.

Chase Bank is located at the signalized, hard corner intersection of SE 2nd Avenue and SE 2nd Street with a combined 28,000 vehicles passing by daily. In addition, the asset is just 2 blocks south from the on ramps to Interstate 95, the primary freeway traveling up the entire eastern coast of the country with over 145,000 VPD. Chase Bank is the anchor tenant to the office tower it occupies with tenant signage rights to the building. The asset is a true trophy location in the heart of downtown Miami with dozens of Miami’s hottest dining, arts, and entertainment offerings. The surrounding area features the Marriott Hotel, Hyatt Regency Miami, Miami Tower, Whole Foods Market, Miami-Dade College Wolfson Campus, Bayfront Park, and the American Airlines Arena. Future developments are also flooding the downtown Miami area with the biggest project being a Miami Worldcenter, a $2.7B mixed use concept that will feature 4 residential towers, a 1,700 room Marriott Marquis hotel, 450K SF of retail, and a 45-story office tower. The 5-mile trade area is supported by a dense population of over 487,500 with an average household income of $65,000. The immediate 1-mile trade area boasts an average household income of $84,750.

P2#437116138
top
Information is deemed to be correct but not guaranteed.
Seller Login