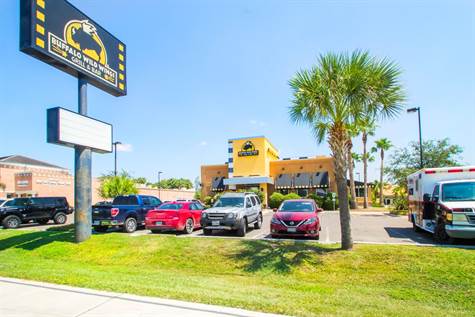 McAllen is the largest city in Hidalgo County, Texas, and the 22nd-most populous city in Texas. It is located at the southern tip of the state in the Rio Grande Valley. The city limits extend south to the Rio Grande, across from the Mexican city of Reynosa, and McAllen is about 70 mi (110 km) west of the Gulf of Mexico. As of 2017, McAllen’s population was estimated to be 142,696. It is the fifth-most populous metropolitan area in the state of Texas, and the binational Reynosa–McAllen metropolitan area counts a population of nearly 1.52 million.

The McAllen area is dominated by local agriculture, border-zone factories, and commerce related to the port of entry at Reynosa into Mexico. Like other border towns, the area has a dominant Hispanic heritage, high growth rate, and a low cost of living. McAllen is in the center of a broad, flat agricultural area known locally as “The Valley” dotted with vegetable and citrus growing interspersed with small towns and expanding suburbs. The more middle-class Edinburg, 5 miles north, is home to the University of Texas Pan American campus, the largest higher education facility in south Texas. Mission is an agricultural center west. McAllen, which has a reputation for being quieter than the border towns of Brownsville and Laredo, has a nice downtown area and is nicknamed “City of Palms.”

The area serves many needs, including shopping of wealthy Mexican residents from northern Mexico as far south as Monterrey, giving a strong retail presence for the type of area. There are many new businesses run by Mexicans. The area does pick up a tourist trade, particularly with winter migrants heading south. But while the manufacturing and agricultural economy are healthy, there are more workers than there are jobs, giving high unemployment and poor residential areas around the city. Cultural and recreational amenities are minor and locally focused.

P2#436024553
top
Information is deemed to be correct but not guaranteed.
Seller Login